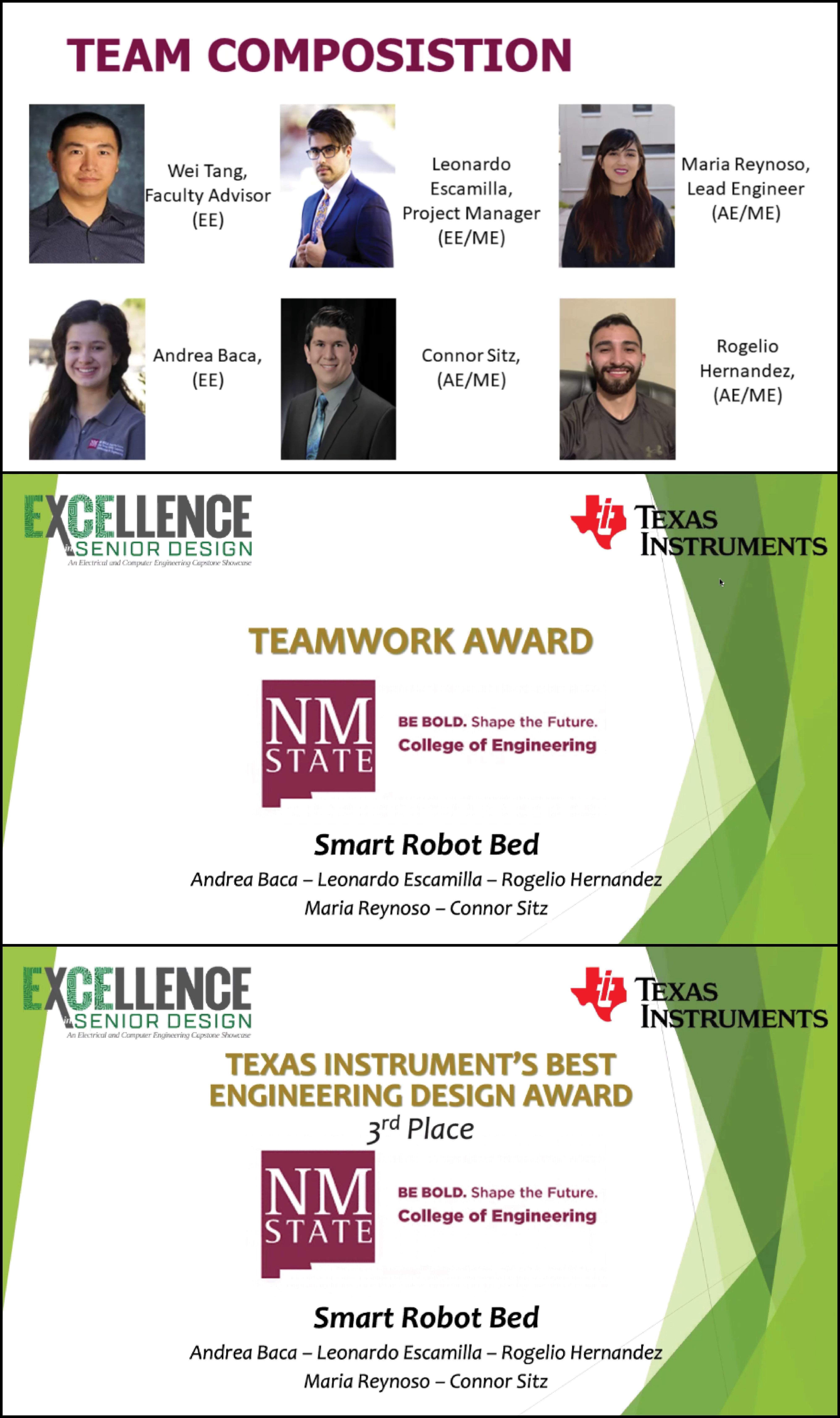 A team of New Mexico State University engineering students have won accolades for their design and prototype of the Smart Robot Bed, a device that can assist elderly and bedridden people regain some sense of independence as well as caregivers.

The virtual contest held this past May was sponsored by the Electrical and Computer Engineering Department Head Association, composed of nearly 250 ABET accredited ECE university department heads or chairs from across the United States and Canada.

“The project was created considering the social and economic challenges in New Mexico and the nation. Our team wanted to work on something cool and useful for everyone, including ourselves when we are getting older,” said Tang.

The project is one that has the potential to improve the lives of millions of Americans now and in the future. “… Starting in 2030, when all boomers will be older than 65, older Americans will make up 21 percent of the population, up from 15 percent today. By 2060, nearly one in four Americans will be 65 years and older, the number of 85-plus will triple, and the country will add a half million centenarians,” reports the U.S. Census.

Indeed, the issue is one that many people are familiar with, including one of the team members, who is hospital caregiver, and some of the competition judges who have senior family members living in their homes.

Capstone projects are the required culmination of engineering students’ degree programs, in which they develop and create a hands-on project during the last two semesters of their senior year. The Smart Robot Bed was tackled by another team in 2019-20 which created a robot bed that can fold and rotate to turn the patient. Due to COVID, the first team was not able to attend the capstone competition.

The first team, began by visiting classrooms in NMSU’s Department of Nursing learning about the need from nurses. Following on that project, one of the second team members, Rogelio Hernandez, was working as a caregiver and has first-hand knowledge about patients and the hospital.

“We found that that it is challenging to help patients move between beds and wheelchairs, that is the reason we started this project,” said Tang.

The teams’ design goals were to develop a bed to aid elderly patients with limited mobility to move from a wheelchair into a bed, and vice versa. They aimed for the system to be operated without the need of additional assistance from another person. They also wanted a bed that would accommodate both the patient and their spouse, enabling the patient to operate the bed regardless of which side they are on, without effecting the spouse’s side.

Other considerations for this project were affordability, materials availability and manufacturing.

“The team has the challenge from COVID, the need to exchange mechanical and electrical components, perform 3D printing, testing the system, etc., in a difficult way,” said Tang. “But the team has been working very hard to overcome all the challenges and finally delivered an impressive capstone project.”

A third team of engineering students under Tang’s tutelage will continue the project during the ‘21-‘22 academic year. Tang is planning for another prototype using soft material and sensors.

“We hope to attract investments to build better prototypes and eventually be able to help patients using our design. We know it is a long way to go so having just finished the first step of a prototype demonstration,” said Tang.

“When we are presenting our project, everyone was impressed, some judges said this is the thing that they need personally since they have senior family members at home,” said Tang.

Award ceremony comments for NMSU’s Third-Place Best Engineering Design Award were: “The judges are impressed by your team thinking about what is the impact that so many people would need this type of technology and how important that could be. We hope you could continue to develop this project because this could be an amazing technology that benefits thousands of lives.”

For the NMSU’s Teamwork Award, the judge comments read: “Your project couldn’t exist without each individual member of the team! Coming together is a beginning; keeping together is progress; working together made you a success.”

Said Tang, “I think this is the best comment for our team.”

A demonstration and presentation video can be found at https://www.youtube.com/watch?v=iicoBeDzOe4

This entry was posted in Department News, Student Awards, Student News and tagged . Bookmark the permalink. Follow any comments here with the RSS feed for this post. Both comments and trackbacks are currently closed.